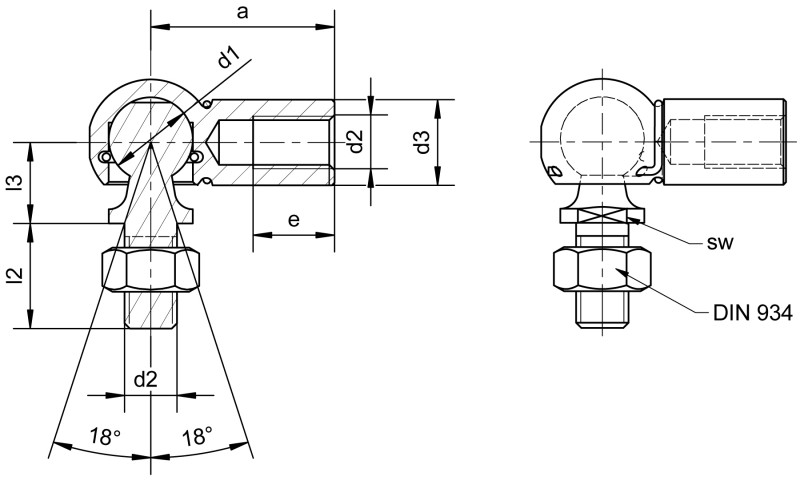 An angle joint is an assembly of different components. The list below describes the individual parts corresponding to the conventional design in accordance with DIN 71802:

Due to the arrangement of the parts, the friction resulting from movement occurs mainly between the ball stud and ball socket. Grease is additionally used to minimize this.

We have also summarised all the information below for you in a convenient video form:

The assembly of an angle joint in accordance with DIN 71802, form CS takes place in the following steps:

Overview of the relevant designs

A series of angle joint designs have become established on the market over recent years. Adherence to this standard ensures economic pricing, long-term availability of the parts and wide-ranging sourcing possibilities.

The most widespread design is the variant defined in DIN 71802, form CS. Thanks to the use of an additional circlip, this joint provides additional protection against unintended disconnection, for example when assembled in a suspended position.

Because the ball socket is designed with a female thread and the ball stud with a male thread, it is easy to combine the part with other components. The pivoting angle is ±18°.

Angle joint in accordance with DIN 71802 with rivet stud

The form BS series in accordance with DIN 71802 is largely identical to the form CS described above. The difference lies in the fact that the ball stud is replaced by a rivet stud. This is particularly suitable if the joint has to be permanently connected to another part.

Thanks to the use of an axial socket, this variant is suitable for linear force transmission. Here again, the pivoting angle is ±18°.

However, due to the geometry, it is not possible to install an additional circlip in this variant. The extraction forces for the ball stud are therefore correspondingly lower. As defined in DIN 71805, these are between at least 30 and 100 Newtons depending on size.

This series is configured individually depending on the installation conditions and can be used in applications involving higher tensile and compressive loads.

This variant can be used in compact installation spaces while remaining fully functional. With the exception of the shortened design of the ball socket, the joint corresponds to the DIN 71802 joint, CS form.

This variant is suitable if additional thread turns are required at the ball socket due to design reasons, for example for adjustments or settings. With the exception of the longer design of the ball socket, the joint corresponds to the DIN 71802 joint, form CS.

Variants with ball sockets possessing a slit or slotted sockets with safety clamp have become established in the automotive sector in recent years. The advantage lies in the rapid assembly of the slotted socket and ball stud.

In most cases, the slotted socket and ball stud are installed separately from one another in the individual assemblies and are joined together only later. For example, the ball socket can be mounted on the tailgate of a vehicle and the slotted socket on a gas spring. This results in an optimised process flow during assembly. In addition, the construction method makes it possible to subsequently replace individual components without difficulty.

A suitable tool and corresponding installation space are required for disassembly. It should also be noted that the safety lock cannot be reused subsequently.

This quick-change variant is an excellent choice if it is necessary to install and remove the joint at frequent intervals. It is usually individually optimised for the application in question and can be installed and removed without the need for any tools.

All the series listed above can also be extended by the following options. These make it possible to meet special requirements or to greatly extend the service life of the joint in certain environments.

The standard variants all have a right-hand thread on both the ball socket and ball stud. The standard assigns a corresponding thread size to each part size.

An additional spanner surface on the socket makes the part easier to assemble using an open-ended spanner on the mating piece.

Sealing caps prevent dust, lubricants or vapours from penetrating into the joint. They cover and seal the opening between the ball socket and ball stud.

Sealing caps are available for angle joints and axial joints made of either steel or stainless steel. They are made of neoprene and can be used in the temperature range from -30 °C to +110 °C or temporarily to +140 °C.

The use of a smooth-running version reduces the friction resistance between the ball socket and ball stud. However, due to their functioning, these joints exhibit a higher level of ball play than the standard version.

The standard angle joint variants are not designed for particularly sensitive applications that demand reduced ball play. It is indeed not possible to manufacture a zero-play joint given the current state of engineering knowledge. However, by adapting the manufacturing tolerances, it is possible to optimise joints individually to meet these requirements.

The design of the parts can be adapted to increase the mobility of the ball stud in the ball socket. In this way, it is possible to achieve pivoting angles of up to 25°.

If a rivet stud is used instead of the threaded stud then the corresponding machines and equipment will be required for assembly. In such cases, the stud is first permanently riveted to the corresponding part. The associated ball socket is then mounted subsequently.

Press-fit connections have also proven their worth in applications in the automotive sector. In this case, the ball socket is adapted precisely to the press-fitted element. This can be a shaft or a wire, for example. The press-fit method permits the rapid, permanent joining of parts.

Angle joints are primarily used in areas of application in which force is transmitted via angular connections. One main advantage lies in the fact that the parts geometry of the joint means that it can move in all directions. This means that in some cases, force transmission in the application is not continuous. In addition, angle joints are often also used for angle compensation or to compensate for play.

Typical areas of application include the automotive and railway industry, agricultural and construction machinery as well as machine and plant manufacturing.